Today is publication day for my chum, and fellow Truly, Madly, Deeply contributor, Nikki Moore’s debut novel, Crazy Undercover Love. In addition to offering a general ‘Whoop! Whoop!’ of congratulation in Nikki’s direction, the occasion also made me think about the string of firsts that writers experience in their career. There’s the first time you actually finish a manuscript, the first time you have the nerve to let anyone else read it, your first rejection, your first acceptance, your first publication.

Eachof those firsts feels like a goal achieved – yes, even the rejection. And each of them – yes even the publication – is followed by a realisation that there still an awful lot more road in front of you than behind and, worryingly, it does appear that quite a lot of that road is uphill. This can be disheartening. I remember being told by quite a prominent literary agent that being a published writer was like being on a treadmill. You have to keep going and keep going and keep going, a book (or more) per year every year without fail. This was 48 hours after I’d signed my first publishing contract. 48hours. That’s how long I got to wallow in the glow of thinking I’d achieved my ambitions before being reminded that ‘life’s a journey, not a destination’ and other equally discouraging platitudes.

So it’s important to take a step off the treadmill every now and then and remember to celebrate the distance already travelled. Take a moment to celebrate those firsts when they come along, and remember to take a moment to celebrate your first second novel just the same as the first first novel. And then you get back on the treadmill and you start again, remembering how damn lucky you are to be on treadmill of your own choosing, and a relatively civilised one at that. It has biscuits and twitter, which makes it a massive improvement on being on, for example, an actual treadmill which just has sweating and the constant danger of puking up a lung.

So welcome to the (metaphorical) treadmill Nikki. Hop aboard. You’re going to love it xx

You can buy Nikki’s debut, Crazy Undercover Love, as an ebook from Amazon, Google Play, iTunes or Sainsburys or pre-order the paperback here. Here’s what the blurb says:

When uber-feisty career girl Charley Caswell-Wright takes on the assignment as PA to the gorgeous Alex Demetrio, CEO of Demetrio International, she’s there under entirely false pretenses; to get her life back on track. Having lost the job she worked so hard to earn, she’s determined not to give it up so easily, especially when she didn’t deserve to lose it in the first place.

Mr Dreamy CEO is her only chance of clawing back her career – and her reputation. So she has to keep things strictly professional… boy, is she in trouble!

And as always, you can buy my debut novel, Much Ado About Sweet Nothing, here. Go on. It’s Shakespeare’s birthday week and it’s based on a Shakespeare play, so why not? I’m assuming you do all theme your reading according to the random high days and holidays that are marked in tiny print in the corners of your diary, don’t you? Next week, for example it’s World Health and Safety Day. I’m sure there’s lots of fun stuff out there we could read for that…

Today is publication day for Truly, Madly, Deeply an anthology of short stories all written by RNA members. I’m absolutely delighted, over the moon, bursting with pride, and a range of other cliches besides, to have a story, Feel The Fear, included in the anthology. And so, along with a whole lot of other authors I’m blogging today about the inspiration for my story.

Feel The Fear is a story about a girl, a boy and a great and fearsome beast. You’ll have to buy Truly, Madly, Deeply to find out which of those three ends up with which. It’s a story I wrote originally fo

r a competition, a competition that I won, and for which I was given a little cup, a fact that I hardly bang on about at all. The brief for the competition was to ‘Write a short story featuring an animal.’ I considered a range of animals – dogs, cats, baby orang-utans, wild salmon, and hummingbirds (which are after all the five main sorts of animal) – before deciding on the great and fearsome beast.

But actually, cool though the beast is, that’s not actually what the story is about. The story is about fear. And that’s often the way. You can describe what a story’s about by describing who’s in it and what they do, or you can talk about what it’s really about. The theme, if you want to get all highfalutin about it.

‘So what’s your play about Mr Shakespeare?’

‘Well there’s this boy and he loves this girl, but then he sees this other girl at a party and there’s a bit of flirting on a balcony, but then it turns out she’s the daughter of his arch-enemy, which is awkward, but he, like, really really likes her. But then he murders her cousin which makes it, like, double awkward. And then there’s some business with a priest and some potions, and the boy thinks the girl – the second girl, not the first, she actually wasn’t that important at all, sorry – anyway he thinks the second girl’s dead, but she’s not, and then he is dead. And then even though she wasn’t dead, in the end she is.’

‘Er, thanks but no thanks Mr Shakespeare.’

‘What’s your play about Mr Shakespeare?’

And so you see I’ve digressed from talking about Truly, Madly, Deeply and ended up on Romeo & Juliet, and there’s nothing wrong with that. Rom and Jules would score high points on the True/Mad/Deep scale, I’m sure, especially the ‘Mad’ bit. I mean, if you like a girl, don’t murder her cousin. It’s just bad manners.

Anyway. Truly, Madly, Deeply is out today featuring great stories and at least one fearsome beast. You can buy it in paperback here, or you can buy the ebook edition, which has 11 extra stories, here.

We’ve also got a handful of copies of the paperback to give away, so why not enter here.

Finally, look out on twitter for the #TrulyMadlyDeeply hashtag where there’ll be links to lots more author blogposts about the anthology, and come join us at our virtual launch party on facebook for virtual champagne and fun and games all day. I’m hosting the afternoon session between 1pm and 5pm, and Laura E James will be there all morning, and Rhoda Baxter takes over hosting duties for the evening. 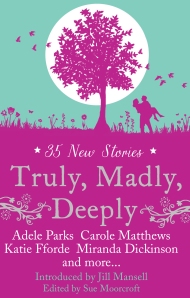