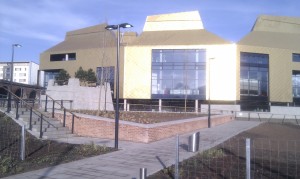 So the magical city of Worcester (note: not actually magical) has a new library. It is called The Hive, and nobody really knows why. It’s very exciting. The reasons it is exciting are twofold. Firstly, it’s a combined University and City library and therefore is a bit massive and has space for ALL the books. If you’re thinking that no library could really have space for all the books, you’re wrong, and need, urgently to get your Pratchett on and learn about l-space. Secondly, the new library is exciting because it is GOLD! Altogether now….

The goldness is particularly exciting because it means that we have a new building that isn’t a glass box. Now some people aren’t fond of the gold. They think it looks a bit weird. Those people are, of course, entirely correct, but I love it. Weird is always better than bland. It’s why I very much like the Selfridges building at the end of Birmingham’s Bullring too. It’s silvery blue and looks like the shopping centre has a big lovely derriere.

Anyhoo, we were talking about the library. I say it’s new. It opened in July. The Queen came and opened it. Actually it was already open then. Queenie “officially” opened it. She didn’t turn up with a big bunch of keys and the code for the alarm system. She just wandered into a building that was already open and pulled back a little curtain on a plaque which said the building was opened by the Queen, which, I think we’ve clearly established, is technically lies. Thinking about it, it was even more of a lie when it was engraved, because the Queen hadn’t even turned up then. Probably the plaque should read, “possibly opened by the Queen, but maybe not. She might cancel with a nasty head cold. Anything could happen. It’s really too soon to say.” But that would probably need a bigger plaque.

Anyhoo, again, the point is I went to Worcester’s shiny shiny new library, and it’s really rather good. It’s like being back at University with all the books and little corners to sit and read and the many many computers which you can log into with your library card or, if you have one, with your University ID. It makes you feel like, with a bit of ingenuity, you could basically make up your own self-study degree programme, and maintain the pretense of still being 19 without the nasty tuition fees. And, because it’s all new, there are modern red sofas with individual overhead lights right out in the middle of the floor where you can walk by them and think “Oooh, red sofas, nice.” And then, further back in the darker corners, there are plain grey chairs and sofas, because it is still a council building after all, and you can’t go frittering public money on red sofas just willy-nilly.

The whole place is a bit of a gift to lazy procrastinating writers and wannabe eternal students like myself, and visiting it has led to a new plan. Novel no 2, which entered hard drafting mode last week, is, I think, going to be written at the library. On writing days I shall pack myself up a little bag with paper and pens and a bottle of water and leave the house like a proper grown-up with a proper job. I shall walk to the library, find a corner (probably a dark corner with a plain grey chair) and I shall write my words. Then I shall walk home again.

This plan has advantages. Again, they are twofold. Firstly, it adds a short walk into my routine, which, hopefuly, will contribute to the ongoing battle against my expanding writer’s bottom. I was going to type “running battle” there, but if I did running the writer’s bottom probably wouldn’t be a problem. Secondly, it moves me away from the home with all its various aids to procrastination, so I might actually manage to write something. I don’t see how I could possibly be led to procrastinate in the big room with ALL the books. Hmmm…

So in summary: libraries are good; big gold libraries are better; and plaques that say the Queen opened something are not to be taken at face value. That is all. Come back next week, when I’ll probably be talking in more detail about the whole diet/weightloss/writer’s bottom issue. Although I might not. I’ll probably become distracted and talk about something else entirely. As ever, please follow if you like what you read. And please comment if you have an interesting thought. If you’re Worcester-local what do you think of The Hive? If you’re not from these parts, then please just chat about libraries, or Queens, or writing locations, or gold things, or anything really.

6 thoughts on “In which I go to the library, and behold its great and wondersome shininess. Aaaaah…”